We are excited to announce that Steve Smith, wide receiver for the New York Giants, has joined our symphony! Steve will be posting about Songs of Love on his Facebook page, where he has 140,000 fans, as well as auctioning signed items for our charity. Steve will also be doing a video asking people to support Songs of Love. Steve, welcome to the Songs of Love family!

Another exciting addition to the Songs of Love family – this month, we are excited to announce that celebrity chef Marcel Cocit has joined us in our mission as a spokesperson and as a member of our advisory board. Recently, Marcel hosted cooking segments for CBS during the Macy’s Thanksgiving Day Parade. Check out video of the segment here! Welcome aboard, Marcel!

We are extremely excited and grateful for the $5,000 grant Songs of Love received this month from the Ronald McDonald House Charities of the New York Tri-State Area(RMHC) and the Child Welfare Foundation. Through their generous grant, we will be able to create personalized songs for many more children!

Songs of Love is excited to be included in the Second Edition of “Music As A Natural Resource Compendium: Solutions for Social and Economic Issues”, launched by the International Council for Caring Communities (ICCC) on September 30th, 2010. The compendium, which features 55 music projects from 33 countries, was presented at the National Arts Club to a large group that included people from the United Nations, government and the general public. The event was held to support the UN’s Millennium Development Goals (MDGs) and UN HABITAT’s “Better City-Better Life” World Habitat Day Celebrations. The compendium is viewable on the United Nations website UNPAN (the United Nations Public Administration Network) – you can access it the UNPAN website.

On September 10th, Songs of Love founder John Beltzer and songwriter of love Carl Allocco made a trip to Puerto Rico for a fundraiser organized by Song of Love recipient Britney Vargas! Britney Vargas, a “songs of love” recipient herself, was so moved after she received her “song of love” back in 2008, that she decided to bring Songs of Love into her home town of Puerto Rico. For the past year she got busy organizing an online fundraiser through the Firstgiving program and raised over $4,000 for the Songs of Love Foundation! Britney then proceeded to organize an event in her home town of St. Germain and raised an additional $3,000! Songs of Love founder, John Beltzer, was invited to join the event at the St. Germain convention center and engaged the guests in the live recording of a “song of love” for 5-year-old cerebral palsy patient Carolina Torres.This is the first official “song of love” in Puerto Rico and will be the first of many as Britney and family will be instrumental in helping the Song of Love Foundation deliver many more “songs of Love” to the children of Puerto Rico.
The Songs of Love Foundation thanks Britney and the entire Vargas family for their support and wonderful hospitality! 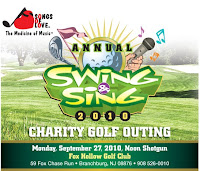 On September 27th, we held our Annual Swing & Sing Golf Outing at Fox Hollow Golf Club in Branchburg, NJ! Despite the rain, the golfers had a great time, teeing off to raise money for Songs of Love. Afterward, they gathered to record a song for a NJ child! Thank you to everyone who made it out for the exciting event!

On September 11th, Susanne Hodge of Orange Park, FL hosted a fundraiser and performance in Jacksonville, FL! Special thanks to Susanne for her enthusiasm and commitment to Songs of Love!

In November, SUNY Medical Center held a fundraiser for Songs of Love. Through their efforts, they raised $2000 for our organization, helping us to keep operating and bring songs to 8 more children! Our deepest thanks to SUNY Medical for this wonderful effort!

In November, Songs of Love had a special visit from Tito Ibarra, a recipient of a song of love! Tito first appeared on a local New York TV show in 1999 and received his song during the broadcast. 11 years later, he is doing great and has completely recovered from his leukemia! Tito was totally inspired by his “song of love” and, as a result, has gone on to become a recording engineer! During his visit, he teamed up with Songs of Love founder John Beltzer to write and record a song for 6-year-old Bodhi Moore of Emmett, ID.

Christmas is just a couple of weeks away – be sure to download our Christmas ringtone to your phone! This cheerful tune is available thanks to our very own songwriter of love Donna Britton! You can download the song here! 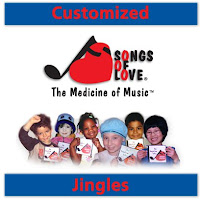 Also, be sure to check out the Songs of Love Customized Jingles for Facebook! Visit our Facebook page and choose from 14 different jingles for different occasions to send to a Facebook friend!

soleden 0
Parents of Love! Join us on Zoom and tell us about your "songs of love" experience.